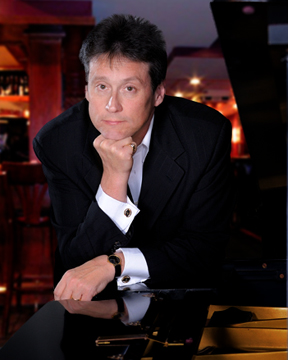 Listen to a quick montage of Ed’s Club Music

Los Angeles is Ed Vodicka’s home base and also where he maintains a large fan base.  From the first months after he moved here in the late 1990s, Ed became a staple in the L.A. jazz scene, mainly through the mentorship of the great studio drummer, Earl Palmer.

Earl played and hosted one of the most widely attended weekly music nights at the famous Chadney’s in Burbank. On any given night, you might find Ringo Starr, Keith Richards, Lou Rawls, Bonnie Raitt or Quincy Jones in the audience — they all came to see and hear Earl.

It’s in that environment that Ed got his start in the LA jazz scene – when Earl asked Ed to join his trio on piano.  That led to the recognition and following Ed enjoys to this day.

In addition, Ed, Earl and John Heard initiated the jazz music at what was to become another valley hot-spot, Charlie O’s. Ed played three nights a week at Charlie’s — one with Earl and two in the house trio with bassist Heard and drummer Roy McCurdy — accompanying a veritable “who’s who” of the jazz world as featured guest artists.

All of this, as well as his busy studio and performance schedule, makes him one of the most recognizable names around town.  His large social media contacts keep the public informed of his performances and he always draws a large, ready-to-party crowd.

When all is said and done, audiences come to see Ed’s performances for two main reasons:  to hear great music and to see Ed.  His crowd pleasing personality and humor make him a natural people magnet and, on the musical side, he knows how to excite a crowd and has the respect of his peers —  reviewer Scott Yanow of the L.A. Jazz Scene calls him “one of the finest jazz pianists currently in the Los Angeles area.”

For restaurant, hotel and nightclub venues, Ed offers several small group combinations.  The ensembles are either the Classic Piano Trio (acoustic piano, acoustic bass and drums) or Quartet (with the addition of guitar) OR the unique Hammond B-3 Jazz Organ Ensemble.  This can range from Jazz Organ Duo (organ and drums) to Quintet (organ, drums, guitar, tenor sax and trumpet) each featuring an all-star lineup of players.  Each of the musicians in Ed’s ensembles carries built-in crowd appeal and marquee value.  And, of course, Ed is always a strong performer on his own as a single pianist.

Particularly interesting for a venue may be one of the Jazz Organ Ensembles.  For very small venues, the organ single or duo takes up less space than a trio with a piano and can play extremely softly  during dining hours. For a large, aggressive venue, the organ (being electronic) can crank it up and kick energy over any crowd.  In addition, in the last several years, the “rebirth” of the hip, retro organ ensemble has become a proven crowd-pleaser.

Call or email Ed to discuss how he can help build your business and create an atmosphere that will keep customers coming back again and again!